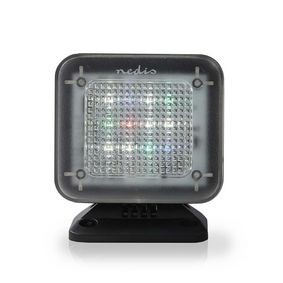 • Realistic TV effect - created by different shades and sequences of 12 flashing red, blue, green and white LED lights • Simple to set up - with plug and play operation • Built-in timer - to switch on for four to seven hours after sunset (automatically detected) • Can be powered via USB (cable included) or power adapter (not included) • Low power consumption (maximum 3 W) - for an eco-friendly security alternative

Need help with this product?

Please contact our support team for an answer to your question.

Find the nearest store or webshop

Sign up
Discover more about the benefits
We use cookies to make your visit to our web shop easier and more personal. With these cookies we collect and analyze information about our web shop visitors and share this with our partners. With this information we adapt the content of our advertisements to your interests and profile. By continuing to browse or by clicking "I agree", you agree to the storing of first-and third party cookies on your device for the abovementioned purposes.
Read more about our cookies.
Cookie settings