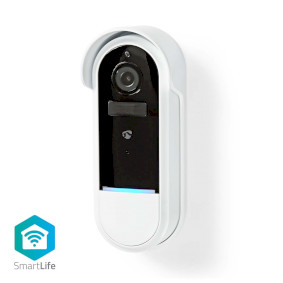 • Battery powered - offering a 100% wireless solution • Battery lifetime up to 2 months in standby or 200 recordings on a single charge • Charged using traditional doorbell transformer (8 - 24VAC) and existing wires or via micro USB • Sends push notifications to your smartphone if someone approaches (PIR motion detector) or rings the bell • Motion detection can also be deactivated (e.g. if your door faces the street directly) • 2-way communication to talk to your visitors wherever you are • Full HD recording (1080p) and digital zoom on your smartphone for a detailed view • Recordings are stored on a MicroSD card up to 128 GB (not incl.) - watch back what happened • Integrated in the Nedis® SmartLife app • Expandable with wireless door chime (WIFICDPC10BK - not incl.) so you'll hear the doorbell when you're at home, no matter where your phone is

Need help with this product?

Please contact our support team for an answer to your question.

Accessories for this product

Find the nearest store or webshop

Sign up
Discover more about the benefits
We use cookies to make your visit to our web shop easier and more personal. With these cookies we collect and analyze information about our web shop visitors and share this with our partners. With this information we adapt the content of our advertisements to your interests and profile. By continuing to browse or by clicking "I agree", you agree to the storing of first-and third party cookies on your device for the abovementioned purposes.
Read more about our cookies.
Cookie settings